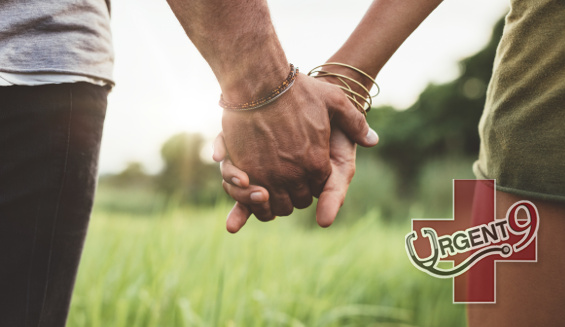 Reaching for your significant other’s hand in times of stress or pain is comforting — anyone who’s experienced doing so would agree. However, new research between the University of Colorado, Boulder and the University of Haifa has found a biological mechanism that explains why empathetic touch works so well to alleviate pain.

What Is “Interpersonal Synchronization”?

This week, the Proceedings of the National Academy of Sciences published the results of a new study that seems to confirm what many people already instinctively knew: the empathetic touch of a romantic partner has a positive effect on well-being… and can even measurably alleviate pain.

What’s more, the researchers found that holding hands with your significant other results in an effect known as “interpersonal synchronization” — the physiological mirroring of each partner’s intrinsic state. When you empathize with your partner’s pain, the study shows that your brainwaves fall into sync with one another. The study also showed, incredibly, that the more in sync the two partners’ brain waves were, the more pain was reduced in the partner experiencing the discomfort.

This is a significant finding, one that the researchers have dubbed “touch-induced analgesia” — literally, pain relief through touch. Now of course, it’s important to understand the scope of this effect. Nobody is suggesting that holding hands will suddenly replace pharmacological approaches to pain relief. However, it’s an interesting effect that scientists believe could be incorporated as part of an overall holistic pain management plan. It’s an area that researchers believe can be mined for additional benefit in the future.

So, how could this possibly work on a biological level? Simply holding hands relieves actual, physical pain? It seems pseudo-scientific on a surface level when stated in such a manner. However, it’s important to remember what was mentioned above: the hand-holding actually leads to brainwave synchronization; and it’s this synchronization that researchers believe eases pain, not the hand-holding itself.

Another theory proposed by the researchers is that feeling the touch of a loving significant other, combined with your perception of their empathy for you, activates reward centers in the brain. It’s thought that this could trigger a mild chemical release that serves to mask or reduce pain signals occurring at the same time.

Interestingly, the study was quick to note that empathy alone didn’t achieve the effect, and touch alone was not necessarily enough to trigger it, either. It seems that the magic combination is empathy plus touch from a romantic partner in order to achieve the analgesic effect. So, the next time your partner has a headache or needs a back rub, give them a hand and know that you’re making a real difference in taking away their pain!