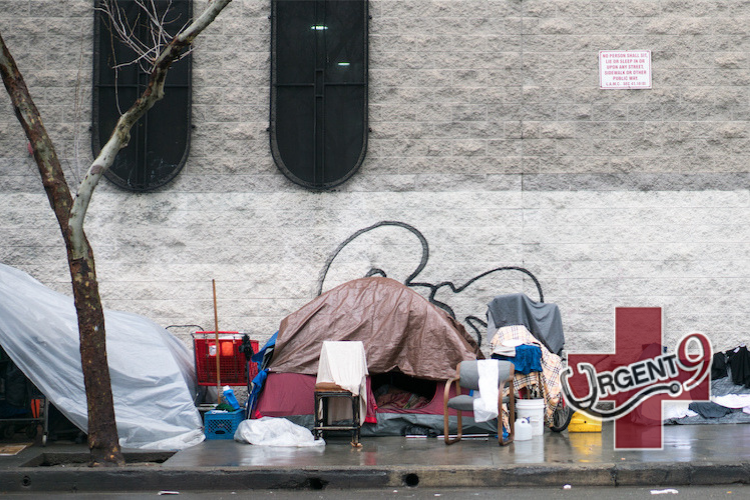 24% of all people who experienced homelessness in 2018 did so while living in California. A huge chunk of those folks are found in Los Angeles county, with Skid Row near downtown LA being one of the most visible centers of this crisis. As the city grapples with how to handle this growing problem, another serious issue is rearing its head: the spread of disease.

Homelessness Affects Us All

Homelessness is a delicate issue. There’s no way to define “homeless people” as a monolithic group, because homelessness affects people of all kinds. Yes, it’s true that addiction disproportionately affects the homeless population. It’s also true that some homeless people choose a life on the streets, unwilling to relocate or even take advantage of county services. Yet, it’s also true that many people had been living paycheck to paycheck, then experienced one financial hardship or emergency and found themselves suddenly on the street with no place to go.

Whether or not you’ve ever known someone who experienced a bout of homelessness, it’s important to realize that we’re all affected by the homeless crisis in Los Angeles. Nearly 60,000 people are living on the streets of LA, and as that population unfortunately grows, so too do our public health concerns. Where disease is allowed to spread unchecked in unhygienic surroundings, it will also spread more easily to the general public. And that’s not to mention the suffering currently being experienced every day by the homeless population who fail to receive the health care they so desperately need. Typhus and tuberculosis, two illnesses which simply shouldn’t be contracted with even a modicum of proper care, are running rampant in homeless communities like Skid Row.

Substance Abuse and Mental Health Are Medical Issues, Too

When we, as a society, are unable to catch people before they slip into severe addiction or experience a severe deterioration of mental health, we create an even larger systemic problem that’s harder to fix. That’s a huge way our failed healthcare system is causing a ripple effect of negativity. Without proper access to simple primary care, small or medium problems quickly spiral into major ones, leaving us as a society even more confused about how to proceed with treatment.

Instead, we need to make basic addiction counseling, psychology screening, and general health services available and in reach of everyone. By offering robust health services on a preventative, community level, we can make a big dent in the growing statistics of homelessness in our state.

Finally, it’s important that we see highly stigmatized ailments like addiction and mental illness for what they are: medical issues. Too often, we might rush to judgment about a homeless person we pass on the street, particularly if we suspect they are in the throes of drug addiction. But it’s important to remember that addiction and desperation are a darkly powerful combination that you can’t simply “snap out” of — especially when you’ve already been denied access to basic health services in your city.