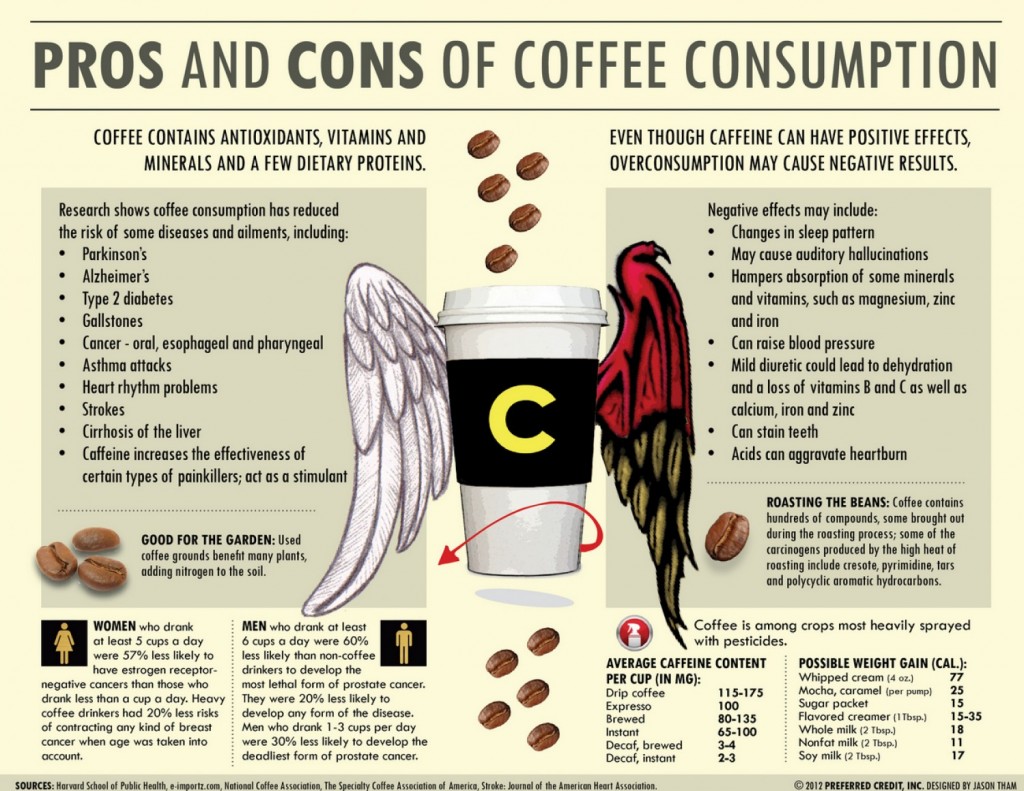 The Pros and Cons of Drinking Coffee

Surveys indicate that almost one-half of all coffee drinkers would give up their cell phone rather than go without coffee for a month. We love our coffee, but headlines vacillate back and forth announcing the pros and con of drinking coffee as a dangerous brew or a healthy cure-all. It is reasonable to believe that “the truth lies somewhere in the middle.” So just what are the pros and cons of drinking coffee?

Coffee provide a plentiful source of disease-fighting antioxidants. Americans consume more antioxidants drinking coffee than from any other source. Antioxidants protect cells from the damaging effects of free radicals, molecules created from food breakdown, tobacco smoke exposure, and radiation. Free radicals are linked to the early stages of heart disease and cancer. They are also believed to play a role in the development of arthritis, diabetes, kidney disease, cataracts, Alzheimer’s disease, and age-related blindness.

Individuals who drink at least one cup of coffee a day were 20% less likely to develop liver cirrhosis, according to a study published in 2006. The study recorded coffee pros and con data from 125,000 people, over a 22 year period. Cirrhosis of the liver is an autoimmune disease typically caused by excessive alcohol use. The results of this study indicate that drinking coffee reduces the risk of being hospitalized or dying of alcoholic cirrhosis. Other studies reveal that heave coffee drinkers (four or more cups daily) are less likely to develop non-alcoholic fatty liver disease (NAFLD).

Caffeine stimulates the central nervous system. When you drink coffee, the brain signals the pituitary gland, which sends a message to the adrenal glands to secrete adrenaline and cortisol, the hormones produced when the body is in imminent physical danger. During this flight-or-fight response, the heart rate accelerates, and respiration and blood pressure increase. With an intermittent cup of coffee, the adrenal glands respond rapidly and efficiently to the stimulation. The response gradually wanes with continued stimulation from drinking several cups of coffee every day. With long-term coffee use, and frequent doses of caffeine, the adrenal glands become exhausted, and are incapable of responding effectively, which increases the body’s vulnerability to health disorders linked to inflammation and fatigue.

Drinking coffee first thing in the morning, triggers the production of hydrochloric acid (HCI) which is used to digest food. If HCI is produced too frequently, the body has trouble producing adequate amounts to also digest a large meal. Low levels of hydrochloric acid result in improperly digested food. Protein digestion is specifically hampered by a lack of the digestive acid, and when undigested protein passes into the intestine, complications of bloating, gas, and inflammation can occur. Numerous other health issues are associated with improper digestion. Contact Glendale urgent care with concerns.

Remember, it’s OK to love your coffee! Just make sure to drink in moderation.