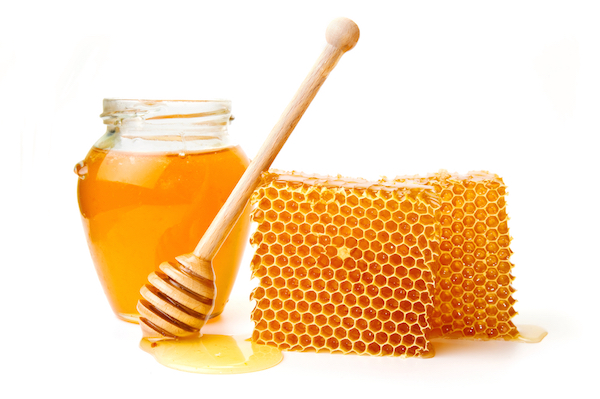 The Sweet Benefits of Honey

In the health food world, it’s been known for some time that honey is not just good for bears. Recently, however, honey has become increasingly popular and is getting widespread attention for its health benefits. While honey does carry some risks, many still eat it in hopes of benefiting from its nutrition.

The Basics of Honey

Using the nectar from flowers, bees produce honey through a process of regurgitation and evaporation. Bees store the honey inside the beehive in a wax honeycomb, later using it as a source of food. Humans harvest the honey from the beehive in order to process it and produce it for consumption.

The flavor of honey depends on the nectar that was used in making it. Honey is given a grade according to its color, with darker-colored varieties costing less than clear, golden-colored honey.

Both raw and pasteurized honey are available on the market. Raw honey is taken from the beehive and bottled directly without any treatment. As a result, small amounts of pollen, yeast and wax can be found in raw honey. Pasteurized honey is treated after being harvested by being heated and processed to remove these impurities.

According to the United States Department of Agriculture (USDA), one tablespoon of honey has:

No minerals or vitamins are found in honey.

Raw honey is believed to have a variety of health benefits, including relief from allergies, colds, indigestion, and has antibacterial and blood sugar level benefits.

Because raw honey contains pollen, eating raw honey that is from the local area can help relieve seasonal allergies. Exposure to the pollen over and over can help the body to become used to the pollen.

The American Academy of Pediatrics and the World Health Organization (WHO) both recommend honey as a natural remedy for coughs. The honey coats the throat, bringing relief from the irritants that can cause coughing to occur. Penn State College conducted a study in 2007 that found that children with upper respiratory infections who consumed honey before bedtime were able to sleep better and had a reduction in their nighttime coughing.

Indigestion, also known as heartburn, can be relieved by using honey. Just as it coats the throat and brings relief from coughing, the same coating can bring relief from heartburn. A 2002 study published in the BMJ found that study participants who consumed five millimeters of honey experienced relief from their heartburn symptoms.

Honey has antibacterial properties because it contains the protein defensin-1. This protein is known to kill bacteria, making honey useful for wounds when applied topically.

In spite of its many health benefits, eating raw honey also carries risks.

Eating a moderate amount of honey each day by people who are over one year old can have a variety of benefits. Try replacing sugar with honey in baked goods, salad dressings or coffee for a sweet treat that’s beneficial for the entire body.